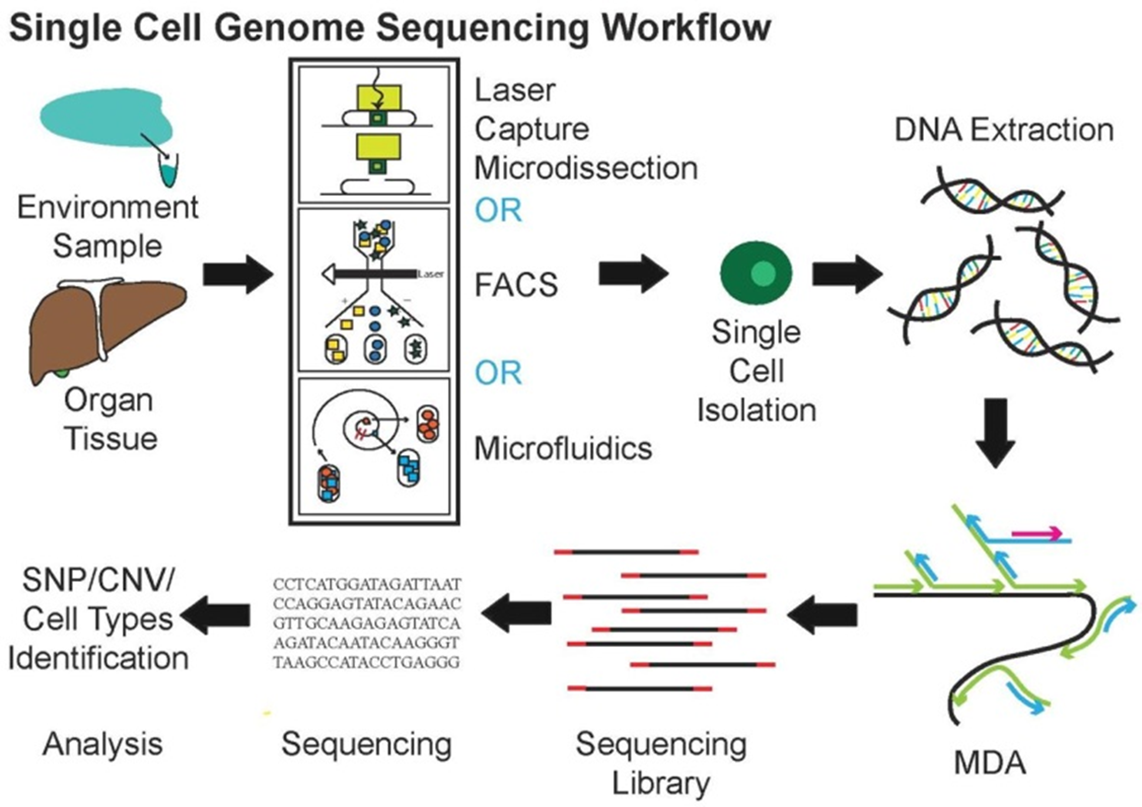 DNA is present in every living organism. Chemically it is a polymer of nucleotides connected via a phosphate-deoxyribose sugar backbone; genetic materials of cells and some viruses. DNA is a chain of codes attached together that is arranged specifically by different bonds thus unchangeable. This self-replicating material contains all the hereditary information that can be transferred from the parent to their off spring. In humans, 99% of the material found in our DNA is same. It is the 1% that makes us looks remarkably different from each other.

DNA molecules together form a sequence. The laboratory method of determining its exact sequence is DNA sequencing. In SCS process, an entire genome can be extracted from a single cell. This revolutionizes our ability to differentiate genotype within a population of cells and pinpoint cells that have spontaneous mutations in their genome that separate them from the others.

It involves the following steps:

By correctly applying these steps, we can compare the differences    between the genomes of cells within the same organ or tissue.

Why is SCS popular?

The studies conducted in Omic sciences (genomics, metabolomics, proteomics, etc.) have clubbed together a culture of tissues or cell assuming Cancer Research (incorrectly) that all cells in a single organism (or organ) are alike. This ‘clubbing together' means the heterogeneity or individuality of the cells. Heterogeneity can be explained at three levels:

SCS has come into limelight because it revolutionizes the field of   medical science and research, and saves thousands of lives from diseases like cancer, genetic diseases, Parkinson’s or Huntington's, autoimmune disorders; neuronal differentiation in the brain; spinal cord injuries and much more. Accurate determination of SCS will help understand the lineage of cell in question as well as detect any residual disease.

Here's an overview of a few applications of SCS technology:

Cancer Research: In the past, we need bulk tissues for disease diagnosis but these tissues contained multiple cells with all myriad of messages that researchers were then trying to (in most cases in correctly) decode. Besides, all the cells within the tissue culture are different. With the advent of SCS, we could now better study intra tumor heterogeneity, rates of mutation, rare tumor cells etc.

The composition of cancer involves multiple clones of the affected cell. Especially in advanced tumors, there will be an even larger number of clones. Many of which will be unique in nature given their heterogeneity. Each of these unique subclones will then have their own set of mutations. This effectively means that all of these cells will react differently to the same therapy. Then there are other complexities like a subclone that might only make up for 0.5% of a primary tumor, which could then turn into the dominant clone if the patient were to experience a relapse. That is why molecular profiling is even more important. SCS changes the way we treat cancer1.

Stem Cell Research: Cells having remarkable potential to develop into many different cell types in the body during early life and growth are called Steam Cells (SC)3. In many tissues they are involved in internal repair systems, dividing essentially without limit to replenish other cells as long as the organism survives. Each new cell from the division of SC has the potential either to remain a stem cell or become another type of cell with more specialized functions, such as a red blood cell, a muscle cell, or a brain cell. SCs are distinguished from other cell types by two important characteristics3. First, they are unspecialized cells capable of renewing themselves through cell division, sometimes even after long periods of inactivity. Second, under certain physiological or experimental conditions, they can be induced to become tissue or organ specific cells with special functions3.